When you get the craft bug it can be quite a fascinating change of your life. It isn’t just about the things you make, at least it isn’t for me; it’s also about the story, for example I just bought and washed a huge wool fleece ready for combing and spinning – it was a lovely sticky sloppy job, it’s all part of the fun. I was particularly interested in this fleece because the lovely lady I got it from also sent me two or three pictures of Denis the Texel sheep who had grown it. So there was already a bit of a story there, but now I have a bit more of the story and the nice thing is that I can tell the story whenever anyone asks about the things I have made from his wool and who couldn’t fall for the story of this not so little fella?

“Denis is on the Pantcyfyng farm Bwlchllan, Lampeter where he and the rest of the flock are looked after by Caroline Lewis.

“Denis was one of a twin from a neighbouring pedigree flock of texels. He was born with contracted tendons and wonky bandy knees on both his front legs. After 3 -4 days of hoping he would strengthen up so he could follow his mother and go out into the field, the owner gave up and asked me if I would like him as he couldn’t do anything with him. Never one to shirk a challenge where a little lamb is concerned, I immediately offered him a home. He spent the first 6 weeks of his life living in my house with splints on both front legs.

The first day he wore the splints he couldn’t work out how to lie down as his front legs didn’t bend. That first night, I slept on the sofa with Denis draped across my body with his front legs dangling off the front of the sofa!!! By day 2 he’d got the hang of it all!! He couldn’t go down to the shed pen with the other orphan lambs though as he couldn’t walk in the straw. 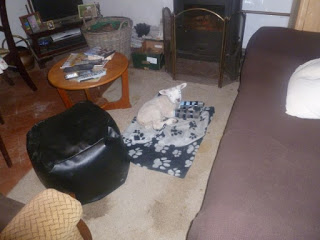 His splints were changed every 4 days as being a Texel he grew rapidly. My one worry was that his daily weight gain would be too much for him to support and I’d never get his legs to hold him up.

Eventually though, with gentle daily walks with me, he strengthened enough to have the splints removed bit by bit each day and finally he was strong enough to go out with the other lambs and lead a normal life.

His original owner had castrated him before I had him and he now has the very important job of babysitting the stock ram “Donald” for 10 months of the year.

He made an appearance on BBC Countryfile alongside Anita Rani in 2015. 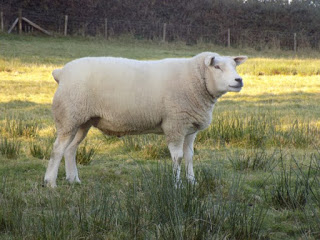 A more gentle sheep you couldn’t wish to meet, I’m sure he thinks he’s a pet dog! He’s one of the farm characters,  love him to bits!! (as you can probably see from the number of photos of him!!!!)”

So that’s where the wool came from that is currently taking up half the house as it dries after its washing.

What happens next is another story – watch this space

Would you like a Tartan designed and registered for your organisation or family? Rchard designs and Hand Weaves to order. Hand Woven textile costs more but you get authentic beautiful textiles to make your kilt or accessories. There are very few real hand weavers who still offer this service.